The eastern part of Trail #3 at Turkey Run State Park takes one along a meandering stream that runs between the steep walls of Rocky Hollow.

Entering from where the stream dumps into Sugar Creek immerses one immediately into the hollow. The railing seen at the top of the ledge is the same Trail #3 heading west toward Bear Hollow. We did not make it to Bear Hollow on this day so it will have to wait for another time!

All along this trail one sees the layered-rock sections overhanging the creek bed. Sun beams shone through the trees and highlighted many sections of the scenery.

We pass Wedge Rock along the trail; this rock looks like someone sliced it like a huge loaf of bread! 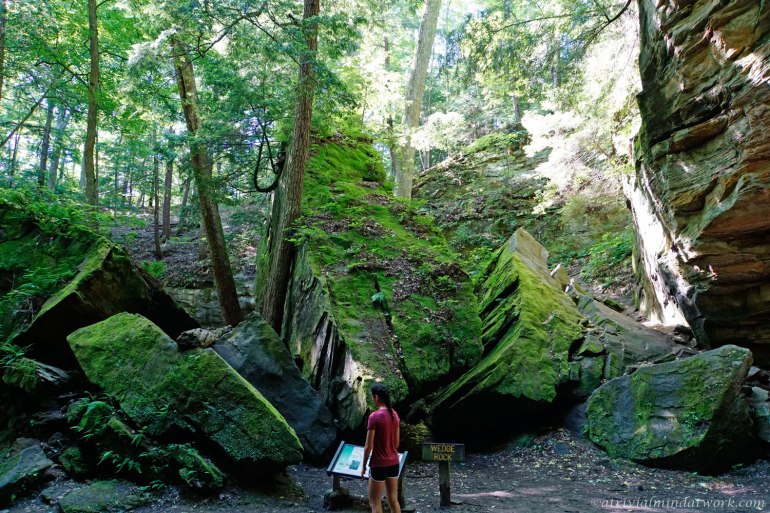 Just past Wedge Rock we ran into another huge outcrop. Charlotte, Cara and I decided to walk along the creek bed. Ethan and the rest of the girls took the higher track nearer to the overhanging rocks; however, they soon discovered that there was no easy way back down to the trail!

Undoubtedly the earliest inhabitants of this region saw the same pristine trail that we walked. These images cannot portray the massiveness of the rocks lining this trail.

Next came the waterfalls. This gap was much narrower than anything we had seen up to this point. To begin with, one either walked up a log or negotiated the slippery rocks to the right of the log to get past the first waterfall section!

The next section of water flowed through a narrow V-shaped crevice – the image here shows it after we had passed over it. One could straddle the sides of the crevice or walk on a narrow and slippery rock path above and to the right of the water! The choice amounted to the proverbial lesser of two evils!

And that was Rocky Hollow. We all survived the trip and we continued walking passed the Punch Bowl on Trail #4. I will save that part of the walk for a later post! Walking this trail was a lot of fun! Stay tuned for more from our day at Turkey Run State Park!