Cara, Ethan, Lain, Laci, Avery and I recently explored the Vandalia Trail between Amo and Coatesville, Indiana. This was our first time on the trail which runs on a long-abandoned railroad bed that cuts through farmland and swampland. The tree line on either side of the trail extends out between 50 to 200 feet. This part of the trail is 3 miles long and we walked from Amo to Coatesville and back.

We saw a lot of wild flowers. About a mile into the walk we reached an old railroad bridge converted to a pedestrian bridge. Later posts will address these; today we will look at the wildlife which was plentiful!

I almost stepped on a red admiral when Laci hollered at me to stop! He certainly blends in well with the gravel. He refused to open his wings for me but did sit long enough for me to get a few close-ups! We saw several other types of butterflies as we walked but none of them wanted to sit for pictures!

Ethan saw a bird flying up ahead of us. We thought it might be a hawk. When I looked at the bird in the viewfinder we found he had spotted a falcon. We have seen a few of those around so far this year. This is by far the best capture of this type of bird that I have. He flew off after just a few seconds. There were many yellow finches and cardinals too all along the trail.

Just as we left Coatesville on the return leg Lain saw a rat snake curled on a tree limb about 20 feet into the woods from the trail. We estimated he was about 4 feet long – apparently he had eaten plenty of rats in his day. I had no problem getting shots of him – he did not move at all. Everyone tried throwing sticks and dirtballs to startle him but he only bobbed his head around and stayed put! He is kind of like our cats! 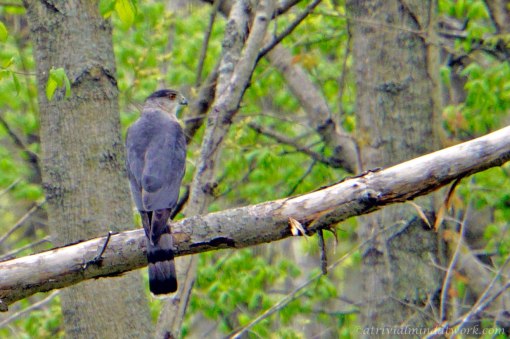 (Click on any image to get a closer look!)

There were chipmunks all along the trail; I have not seen any chipmunks in town for a long time. These moved too quickly for me to get a good shot – maybe next time. Coming up, future posts will look at the bridge, the wild flowers and the game the kids played as we walked!